During his 30-plus years of ministry, Harris has recorded 18 albums, won five Grammy Awards and 11 Dove Awards, and has had 19 number one songs on the inspirational music charts with countless top 10 hits. Songs such as “How Excellent Is Thy Name,” “I Miss My Time With You,”  plus many others, including his signature song, “Amen,” are now considered modern gospel classics. Of his many chart-topping songs, perhaps his best-known are his duets with Sandi Patty called, “More than Wonderful” and “I’ve Just Seen Jesus.”

Few names are as synonymous with Inspirational music as Larnelle Harris. Admired by fans and peers alike for his majestic tenor voice, Larnelle has become the epitome of talent and integrity in a career that spans over three decades. Newly-inducted into the prestigious Gospel Music Hall of Fame, Larnelle has garnered numerous accolades for his music including five Grammy Awards, eleven Dove Awards (three of which were for Male Vocalist of the Year), and a Stellar Award, among other honors. Larnelle was one of the first Christian artists to cross racial barriers and build healing bridges with predominantly white churches who had never had a black singer on their platform. He has garnered nineteen #1 radio singles and countless top 10 hits, including three top 10 national Inspirational singles coming in the past 12 months alone. Songs such as “How Excellent Is Thy Name,” “I Miss My Time With You,” “I’ve Just Seen Jesus,” plus many others, including his signature song, “Amen,” are now considered modern classics.

Harris is a lifelong Kentucky resident. He was born in Danville and later made his home in Louisville where he has resided over 35 years with his wife, Cynthia (a.k.a. Mitzy). Larnelle has successfully combined the demanding lifestyle of a global music ministry with being a husband and father of two grown children. Still a sought-after vocalist for special events and ceremonies, Larnelle also continues to perform solo concerts for churches and Christian organizations worldwide each year.

Wowing crowds with a voice that still soars with both soulfulness and tenderness, Larnelle continues to receive rave reviews for his performances. Contact Morning Song Concerts for details in booking Larnelle for your next event.  We’ve just booked Larnelle for the Loma Linda University School of Allied Health Alumni Weekend (2012)

Here is a sample poster of one of our recent bookings for Larnelle.  We also designed the poster. 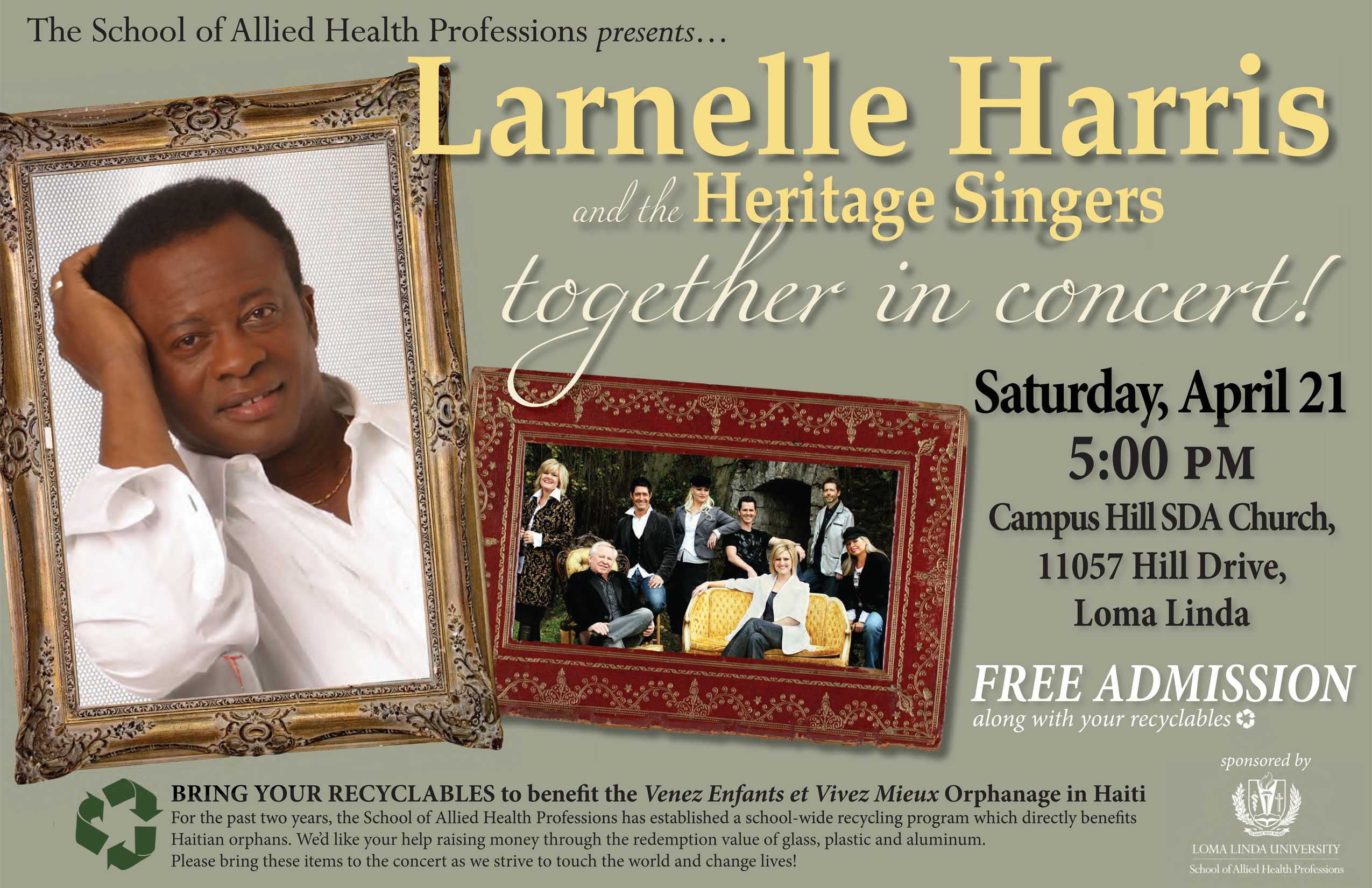