“After 10 years of working with Reggie and Ladye Love, I’ve never once seen them run out of energy.  With all that wonderful energy, plus a wealth of talent and a genuine, sweet spirit, this couple makes beautiful music wherever they go.  They can delight a room of any size with a song of any kind.”  — Bill Gaither

“Reggie and Ladye bring honest joy to the celebration of married love, and are not afraid to be transparent about the hard stuff.  They love the Lord and sing like angels!” — Gloria Gaither 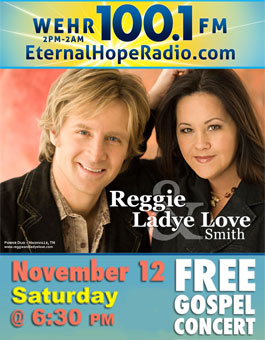 Sample poster of a concert booked by MSC

Internationally known for their vocal proficiency, Reggie and Ladye have performed in over 12 countries, and in some of the most exclusive places in the world including Super Bowl XXVI, the Kremlin in Moscow, and New York’s Carnegie Hall.  The Smiths have complemented some of the top talents in both country and gospel music including Dolly Parton, George Jones, Lee Greenwood, Brenda Lee, Ricky Skaggs, Steven Curtis Chapman, Bob Carlisle, Ray Boltz, Sandi Patty, Larnelle Harris and Vestal Goodman, just to name a few.

While their singing talents open many doors for the couple, it is their ability to relate to the personal needs of the people in the seats that earn them a standing invitation at most places where they minister.  As a couple and as individuals, the Smiths offer audiences much more than just mere entertainment.  Ladye holds a Master’s Degree in Counseling and is frequently involved in women’s retreats and conferences (most recently with Gigi Graham-Tchvidijian).  Reggie, in addition to producing various album projects, lends his Music Education background to conducting retreats and praise & worship conferences, working with The Billy Graham School of Evangelism and LifeWay Christian Resources, to name a few.

It is when they take the stage together, however, appreciating each other’s strengths and weaknesses, and loving, laughing, and sharing the special bond created by their long friendship and ten-year marriage, that Reggie and Ladye truly connect with people around the globe.

“We feel a definitive call in our lives to stretch beyond where we’ve gone before,”  says Reggie.  “But if it all stops tomorrow, we’ve been blessed abundantly more than we could have ever dreamed.  Through all the ups and downs, and successes and failures we’ve seen in life, God’s  faithfulness has simply been overwhelming.”