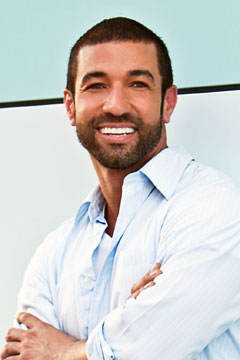 Whether seen on television or heard live in concert, Rudy Micelli’s voice and ministry are a compelling force and creates an excitement and desire in the listener to experience more.  Although some might compare his voice to Josh Groban, Steve Green or to Michael English, his second tenor resonance is filled with a beauty all its own. Rudy has a masterful way of communicating through song.

Rudy Micelli, born in Bagé, RS, Brazil, began his singing career as a soprano in the family choir. With seven (yes, 7) older siblings he inescapably was assigned to the melody with his mother. And at age 5 he sang his first solo at church. Starting at 18 he began professional voice training. As a member of the highly acclaimed music group “Vocal Mandrialis”, he gained notoriety on the premiere stages of Brazil. But God’s calling in his life brought him full circle, back to the music of his childhood – the music of Christ.

His move in 1997 to the United States brought about a new challenge. Not only was he performing in a new musical genre – Gospel, but in a new country and new language. He began singing in local churches in Miami, Florida. His voice and ministry began to be noticed and in 1998 Sony Music offered Rudy a secular recording contract to become the next American-Latin pop sensation. Having experienced what it is to be involved with the secular music entertainment and how that can separate one from God’s real purpose in their life, Rudy recommitted his life and ministry and chose instead to commit his voice to the Lord in full-time and self-supporting concert ministry.

Today, he speaks and sings fluently in English, Spanish and Portuguese. Saying it simply, Rudy has become a favorite with numerous cultural audiences. Recent appearances on television programs and satellite broadcasts have introduced him to the Christian community around the world and they have welcomed his music and ministry with open arms.

Here is a sample poster of one of our bookings for Rudy.  We also designed the poster.

Learn how to get a song on itunes at ReverbNation.com